24 Hours a Day
Check out this episode!

“The Doctor’s Opinion” contains two letters written by William D. Silkworth, a man whose name is well-known to those who is familiar with the history of AA. In this chapter, There is also some brief writing by Bill Wilson, the co-founder of Alcoholics Anonymous. Bill W. penned the bulk of the Big Book’s core chapters, but “The Doctor’s Opinion” primarily belongs to Silkworth. It was written at a time when AA was just beginning to establish itself as a new outlet of recovery for people afflicted with what was rapidly becoming viewed as a disease.

Some may think that the big book is just for alcoholics, but many who are addicted to other substances will learn much of their condition from the views espoused by Silkworth in “The Doctor’s Opinion.” Tonight, we will talk about Silkworth’s writings, as well as how lessons from “The Doctor’s Opinion” have relevance in our own lives. This is the chapter that is meant to first establish a basic understanding of recovery.

Let’s start with the author of the chapter. Who was the author and what were his credentials?

The book says that he is a:
chief physician at a nationally prominent hospital specializing in alcoholic and drug addiction

Does this impress?
When you first found out about Silkworth, what did you think?
What has been your experience with medical doctors and alcoholism and recovery?

2. What must we believe to be essential in defining Alcoholism? (Pg. XXIV)

4. How does the doctor explain the allergy in his letter? (Pg. XXVI)

Let’s read the part where Doctor Silkworth presents the theory that alcoholism is like an allergy:

We believe, and so suggested a few years ago, that the action of alcohol on these chronic alcoholics is a manifestation of an allergy; that the phenomenon of craving is limited to this class and never occurs in the average temperate drinker. These allergic types can never safely use alcohol in any form at all; and once having formed the habit and found they cannot break it, once having lost their self-confidence, their reliance upon things human, their problems pile up on them and become astonishingly difficult to solve.

What is your reaction to these statements?
What do you remember as important when you were new?
How do you react to this now?
What part of this impacts you today?
Your thoughts?

5. Why, according to the doctor, do men and women drink? (Pg. XXVII)

Why do people drink?
Let’s read what the doctor says:
Men and women drink essentially because they like the effect produced by alcohol.

What is the difference between enjoying and obsessing

6. How does the doctor describe the “cycle” of alcoholism? (Pg XXVII)

Let’s talk about how Silkworth describes the cycle of alcoholism.

Here is the text

They are restless, irritable and discontented, unless they can again experience the sense of ease and comfort which comes at once by taking a few drinks-drinks which they see others taking with impunity. After they have succumbed to the desire again, as so many do, and the phenomenon of craving develops, they pass through the well-known stages of a spree, emerging remorseful, with a firm resolution not to drink again. This is repeated over and over, and unless this person can experience an entire psychic change there is very little hope of his recovery.

Can you relate?
How do you react to this today?
How did you react when you were new?

7. What, according to the doctor, is required to recover? (Pg. XXVII)

Here is what the doctor says is necessary for recovery

This is repeated over and over, and unless this person can experience an entire psychic change there is very little hope of his recovery.

What was your reaction when you first understood this?
What do you think now?

Let’s read what the book says about the effectiveness of will power against alcoholism.

8. Does the doctor hold that alcoholism is simply a problem of mental control? (Pg. XXVIII)

I do not hold with those who believe that alcoholism is entirely a problem of mental control. I have had many men who had, for example, worked a period of months on some problem or business deal which was to be settled on a certain date, favorably to them. They took a drink a day or so prior to the date, and then the phenomenon of craving at once became paramount to all other interests so that the important appointment was not met. These men were not drinking to escape; they were drinking to overcome a craving beyond their mental control.

9. What do all classes of alcoholic have in common? (Pg. XXVIII)
they cannot start drinking without developing the phenomenon of craving. This phenomenon, as we have suggested, may be the manifestation of an allergy which differentiates these people, and sets them apart as a distinct entity. It has never been, by any treatment with which we are familiar, permanently eradicated. The only relief we have to suggest is entire abstinence.

What would you say to the new guy? 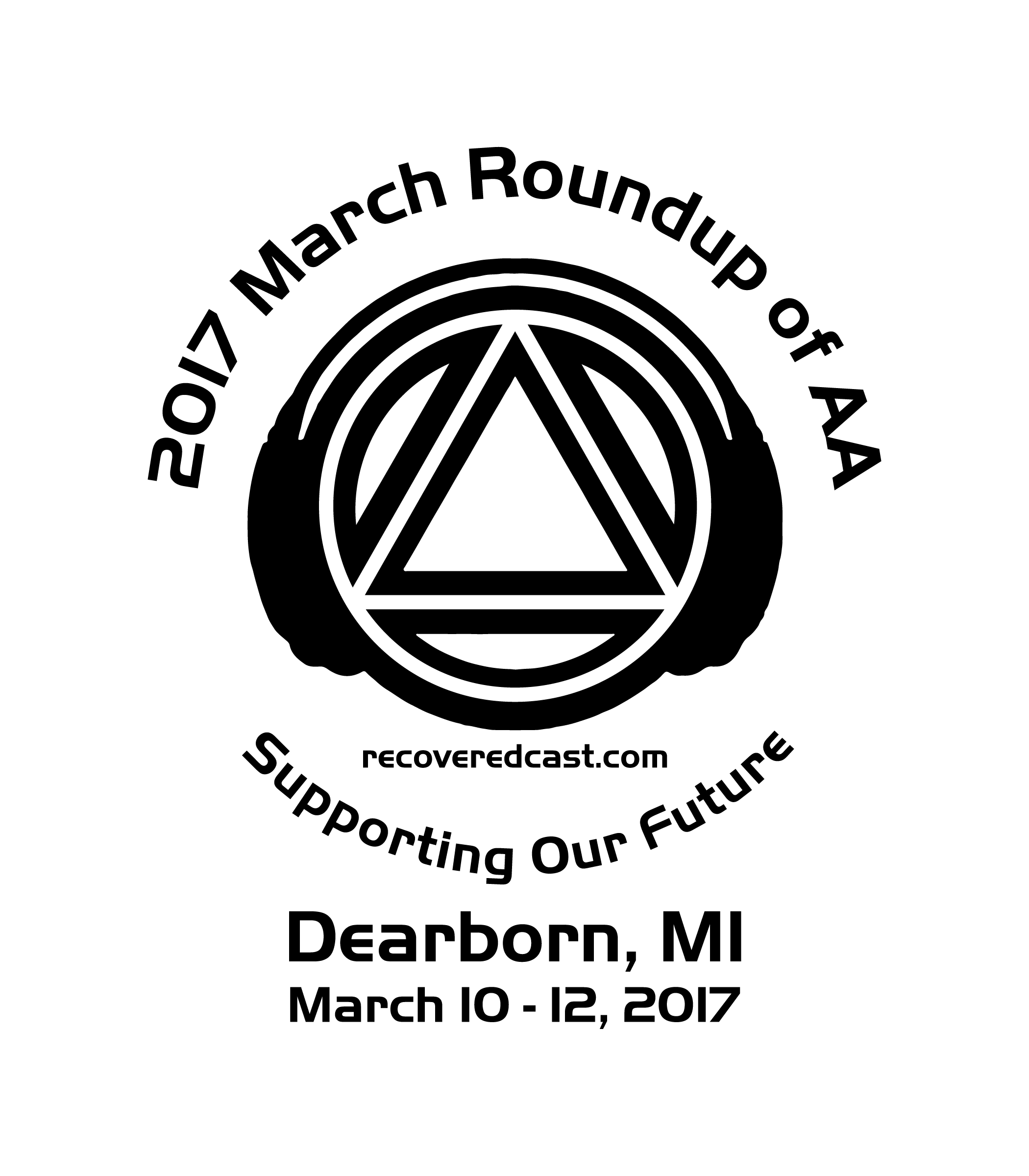 This is the Official Recovered Podcast Tee Shirt Image

We will have 8 men’s and 8 women’s
Quantities we currently have in stock for men and women:
2 medium
4 large
2 XL

If you would like one, please make a donation.  If you make a donation of $50 or more, we would like to give you a tee shirt as a sign of our appreciation.  These donations will help underwrite the significant cost we have already incurred to secure a hospitality suite at the 2017 March Roundup in Dearborn, Michigan on Saturday, March 11, 2017.

To make a donation, just go to

For more information on the roundup, just go to

For more information on the Recovered Podcast Reception and Live Podcast, just go to

When people decide to give up an addiction, they are agreeing to make a major change to their life. The benefits of such a dramatic alteration of course can be wonderful, but it will be a step into the unknown.

The individual needs to summon up a great deal of courage and be prepared to let go of their old habits. Once the individual becomes sober it does not mean the process of change is complete.

When you were new, what was the main thing you had to change?
Tell us what happened?
What was standing in the way of change?
What recovery tool helped?
What did not help?

What are you trying to change today?
What is in the way?
Why is it difficult for you?

What do you hope to change in the future?
Why are you waiting?
When will you know it’s time?

What would you say to the new guy?

Come to the Recovered Podcast Reception at March Roundup

For $35 off your first delivery

Upgrade to Premium Membership, watch the video at http://recoveredcast.com/freeapp

Jason has been with the addiction treatment facility called
Dawn Farm since 1994 and
has served as the Clinical Director since 1999.
Jason is also an adjunct faculty at
Eastern Michigan University’s School of Social Work.

Jason is principle author of a very popular recovery blog.
Jason blogs at addiction recovery news.com and
has been published in Addiction Professional magazine and
in an Addiction Technology Transfer Center monograph.

Jason, welcome back to the Recovered Podcast studio

Jason, you are very active on the internet regarding addiction and recovery.
How has the internet changed Dawn Farm?

Tell us about the history of Dawn Farm
What sets Dawn Farm apart from other local treatment facilities?
How do you measure success?
What has changed in the treatment process?
What are some of the obstacles to recovery for your clients?
Tell us a success story.
What is the future of the recovery in general and Dawn Farm in particular?

Many in our audience are dealing with a teen or young adult with addiction issues.
I wanted to explore some of the questions that should be asked when looking for treatment

1. Questions to ask about assessment
What is an assessment?
What tools should someone look for?
Are there different levels of care?
What is eligibility criteria?

2. Questions to Ask About Attention to Mental Health and Medical Care
How does mental health issues affect treatment?
How are symptoms diagnosed?
Are mental health professionals typically on site?
What about medications?

3. QUESTIONS TO ASK ABOUT COMPREHENSIVE INTEGRATED TREATMENT
What is Comprehensive integrated treatment?

4. STAFF QUALIFICATIONS AND TRAINING
How does someone get this information?

A significant number of our listeners have not yet been to a meeting, what would you like to say to this person

Going to the March Roundup? Join the Recovered Podcast as we host a reception at the Edward Hotel in the Rolls Royce Hospitality Suite from about 2:00 to 6:00 pm on Saturday, March 11. We will podcast live at about 5:00 p.m. There will be coffee and water, bring a snack and your sponsee! http://recoveredcast.com/roundup

For $35 off your first delivery

Upgrade to Premium Membership, watch the video at http://recoveredcast.com/freeapp

24 Hours a Day
Check out this episode!